Are there 2 new Youth & Screen Fingerprint Edition versions of the Mi 8 coming?

Earlier this year, Xiaomi introduced three Mi 8 series smartphones (Mi 8, Mi 8 SE, and Mi 8 Explorer Edition). Now we have learned from his source MySmartPrice that the company will announce two new additions to the Mi 8 series in China very soon.

According to their source, Xiaomi will launch two new smartphones in the series My 8 in China - the Mi 8 Youth and the Mi 8 Screen Fingerprint Edition. Let's start with the Mi 8 Youth. The Xiaomi Mi 8 Youth will be available in three memory configurations - 4GB RAM + 64GB, 6GB RAM + 64GB and 6GB RAM + 128GB. Color options will include Gray, Gold and Blue.

The Xiaomi Mi 8 Screen Fingerprint Edition will be available in only two configurations - 6 GB RAM + 128 GB and 8 GB RAM + 128 GB. It will be offered in two colors - Black and Gold. 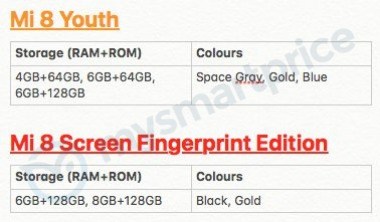 Mi 8 Youth, Screen Fingerprint Edition and what to expect

Regarding the specifications of the two smartphones, our source did not give us details. However, based on the name, the Mi 8 Youth will probably be a more affordable version of the Mi 8 with slightly lower specifications. While the Mi 8 runs on an octa-core Qualcomm Snapdragon 845 chipset, the Mi 8 Youth Edition will most likely be released with the Snapdragon 710. Mi 8 SE. As far as the camera is concerned, it is rumored that it will be the same as the Mi 710 and Mi 8 Explorer Edition.

As the name implies, the Mi 8 Screen Fingerprint Edition will feature a fingerprint sensor below the screen, similar to that of the Mi 8 Explorer Edition. The rest of the basic specifications are expected to be identical to the Mi 8. The Mi 8 model has a 6,21-inch AMOLED screen with Full HD + 1080 x 2248 resolution and an aspect ratio of 18,7: 9.

As mentioned above, the Mi 8 runs on a 845 GHz octa-core Snapdragon 2,8 processor with Adreno 630 GPU. The Mi-8 smartphone has 12MP + 12MP (dual camera) and 4-axis optical image stabilization and lossless zoom . The Mi 8 has a Selfie camera with 20MP resolution, with AI portrait function and IR Face Unlock.

The Mi 8 is powered by a 3400mAh battery with Fast Charge 4+ support. In terms of software, the Mi 8 Youth and Mi 8 Screen Fingerprint Edition are expected to be released with Android 8.1 Oreo (Miui 9 or Miui 10).

ΜDo not forget to join (register) in our forum, which can be done very easily by the following button… 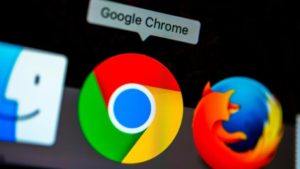